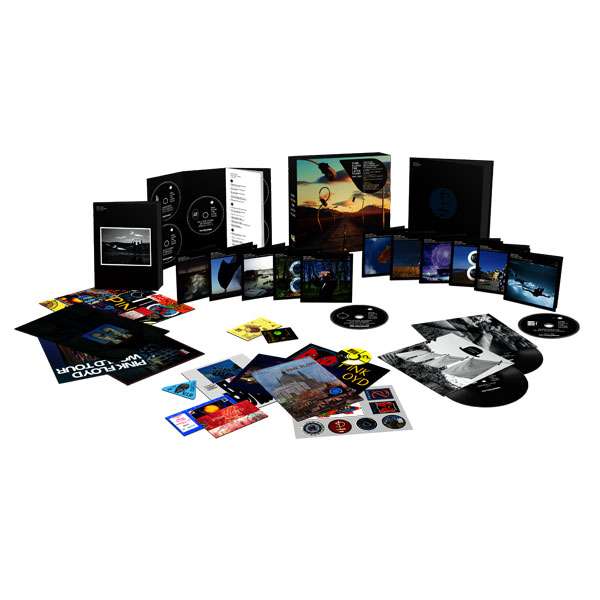 PRICE MATCHING. Please note that pre-order pricing is likely to vary, in line with prevailing business practices. Please note this item is for preorder and we expect it to ship on or around December 13th. To receive any non-preorder items sooner, please place a separate order. The Official Pink Floyd webstore strives to be as competitive with large online retailers in regard to pricing, but as a much smaller enterprise, we are not always able to match them exactly. In that vein we have priced the product as competitively as possible. We appreciate your business.

On December 13th, Pink Floyd Records will release Pink Floyd The Later Years, an 18-disc set (5 x CDs, 6 x Blu-Rays, 5 x DVDs, 2x7 plus exclusive photo book and memorabilia) covering the material created by David Gilmour, Nick Mason and Richard Wright from 1987 onward. The period generated record sales of over 40 million worldwide and included three studio albums: A Momentary Lapse of Reason, The Division Bell and The Endless River as well as two live albums: Delicate Sound of Thunder and Pulse. With additional production from David Gilmour and Andy Jackson, over 13 hours of unreleased audio and audiovisual material, including the sought-after 1989 Venice and 1990 Knebworth concerts, Pink Floyd The Later Years is a must for all fans.

DVD 5 x DVDs (duplicating the content of Blu-rays 2-6 above), each contained in a gatefold wallet with dedicated cover art, including tracklistings and music publishing credits.

Memorabilia A collection of reproduction memorabilia including tour passes, stickers and posters, all printed to replicate the originals, and contained in a prestige card envelope.